I am so excited to share that I’ve been invited by the Red Rover Series to perform as a featured artist in Chicago’s city-wide performance arts festival, IN>TIME! I present on Friday, February 12th at 8pm.

I’ll be presenting a piece, titled “BLUE LIGHT and WAVE” that is dedicated to the deep blue twilight of the sub-arctic. Here’s the write up for it: 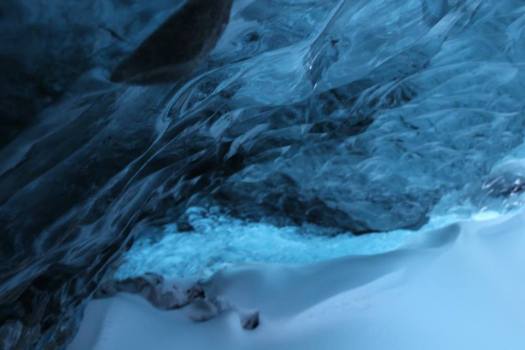 Dedicated to the deep blue of arctic twilight, BLUE LIGHT and WAVE meditates on human fragility, memory, and longing. Centered on the premise that light is a language, BLUE LIGHT and WAVE engages the subtle light of twilight–the sun’s intensity is softened as the earth turns away from its direct shine; shorter blue wavelengths dominate the landscape, allowing distant starlight to permeate our gaze.

In the realm of this softened blue light, our bodies are perhaps most open to receiving the subtle messages that have traversed unimaginable distances to descend into us. Under such a sky, can we speak with the stars, to the gentled sun? What stories do we seek to communicate back into the heavens?

Video elements were shot in the subarctic environment of wintry Norway, capturing the twilight’s fall into deep blue. The installation collects together materials from the region that were “charged” with this blue light; the hope is that they will transmit these wavelengths resonantly into the audience’s bodies. The performance poaches elements from the Korean traditional dance form of the salp’uri–a shamanic dance for discharging grief and hardship. A meditative solo dance, the salp’uri form features a long white sash that helps the dancer communicate these emotions into the atmosphere.

An intimate experience, BLUE LIGHT and WAVE invites up to 20 individuals to wander through the installation and observe a twenty minute ritualistic recitation and performance.

If grief is a deep blue set loose in our bodies, can it find rest under a twilight sky?